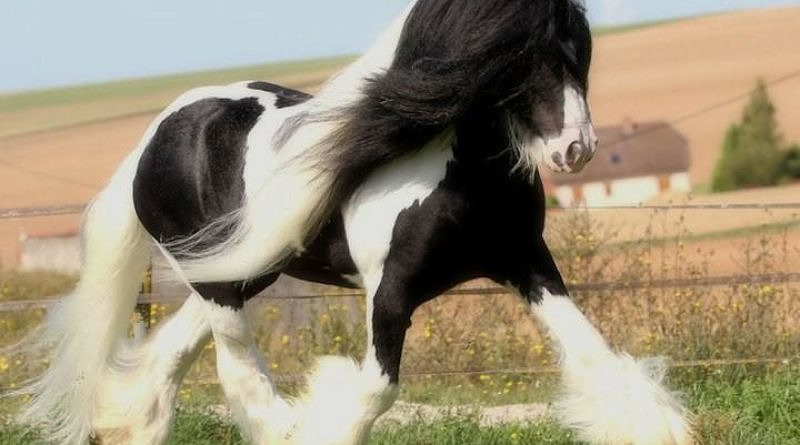 Most people probably have some idea of what they think a ‘cob’ is, likely shaped by horses they have met that they know to be ‘cobs’. But the term is so often misused or ill-defined that the whole question of what a cob actually is can prove to be quite a complicated one!

Where does the word ‘cob’ come from?

The etymology of the word cob appears to be from late Middle English. It meant a strong man or a strong leader and it seems the underlying sense of the word was to imply a strong, sturdy and rounded shape. This is perhaps why a round loaf of bread is also known as a ‘cob’ and where the word ‘cobblestone’ also comes from.

What does it mean with respect to horses?

As you might expect from the origin of the word, a cob is “strong” and “rounded” : a cob is simply a type of horse that has a sturdy build, strong bones, large joints and generally stout appearance. They can be any size but traditionally, they have been thought of as a small horse above pony height. This differentiates them from sturdy ponies and larger draft horses with a similar build.

Is it a breed?

A breed is usually defined in terms of a combination of specific recorded lineage requirements as well as a conformational breed standard.

A ‘cob’ is therefore not in itself a breed. However there are many breeds that are of cob type and some of them have “cob” in the name.

The Welsh Cob on the other hand is strictly speaking just one of four closely related types that together are referred to as the Welsh (Pony and Cob) breed. The separate sections can be interbred and recategorised to an extent, in accordance with guidelines set out by the Welsh Pony and Cob Society. So while all Welsh Cobs are purebred, and a cob, they do not make up an entire breed by themselves but instead are only the cobby subset of the Welsh breed.

In the horse world things like this are never simple! Horses that are heavily feathered with a sturdy build and usually tobiano (piebald or skewbald) colouring are widely referred to as “Irish Cobs”, “Gypsy Cobs”, or “Traditional Cobs” regardless of their lineage.

Though there are various societies around the world that register and keep track of these kinds of horses to give them breed status – such as the Traditional Gypsy Cob Association – more often these terms are ambiguous and refer to the recogniseable outward characteristics rather than to a specific breed. They are still all cobs, however!

Traditionally, cobs are small horses. But the general cob type has become very popular thanks to their versatility as all-rounders for riders of all kinds. As a result, larger cobs have become commonplace and are frequently termed ‘maxi cobs’. At the other end of the spectrum, undersized Gypsy/Irish/Traditional cobs also exist. These hairy, sturdy ponies are affectionately referred to by some as ‘coblets’. Both of these are descriptive terms that account for the height and type of horse. They are not breeds in their own right.

As we have seen, cobs come in all kinds of different shapes and sizes. The term is purely descriptive and can be applied both to purebreds and horses of entirely unknown pedigree. What this means is that the popular idea that cobs have a generally lazy or ploddy disposition is very much unfounded. Cobs, like any other broad type, are only unified by certain outward physical characteristics. The fact a horse is of cob type does not mean they will have a specific disposition and it is a rookie mistake to be taken in by this myth! Many cobs are not at all suited to less experienced riders/handlers and are every bit as challenging and forward-going as a horse of a lighter build. When evaluating a cob as a prospective equine partner, it’s important to set aside any preconceptions and focus instead on that specific individual’s personality.